Wanting to stretch our legs a little, and listening to some of our alumni who had ‘Kili’ on their bucket list, we decided to organize a climb. And it worked (errr…mostly worked). We are happy to report that in the early morning hours of Sept 7th, Tanzanian time,  all members of team ‘Kilimanjaro Coffee Crushers’ made it to the crater rim of the highest free standing mountain in Africa where they were thoroughly thrashed by heavy winds.  Our nationalities included Australia, Canada, USA and Nepal. Three members (Sharon, Tony, and Jennie) were alumni of HAL’s Annapurna Circuit 2017 Fastpack. We were also joined by Sally (Australia) and her husband Rick (Canada). 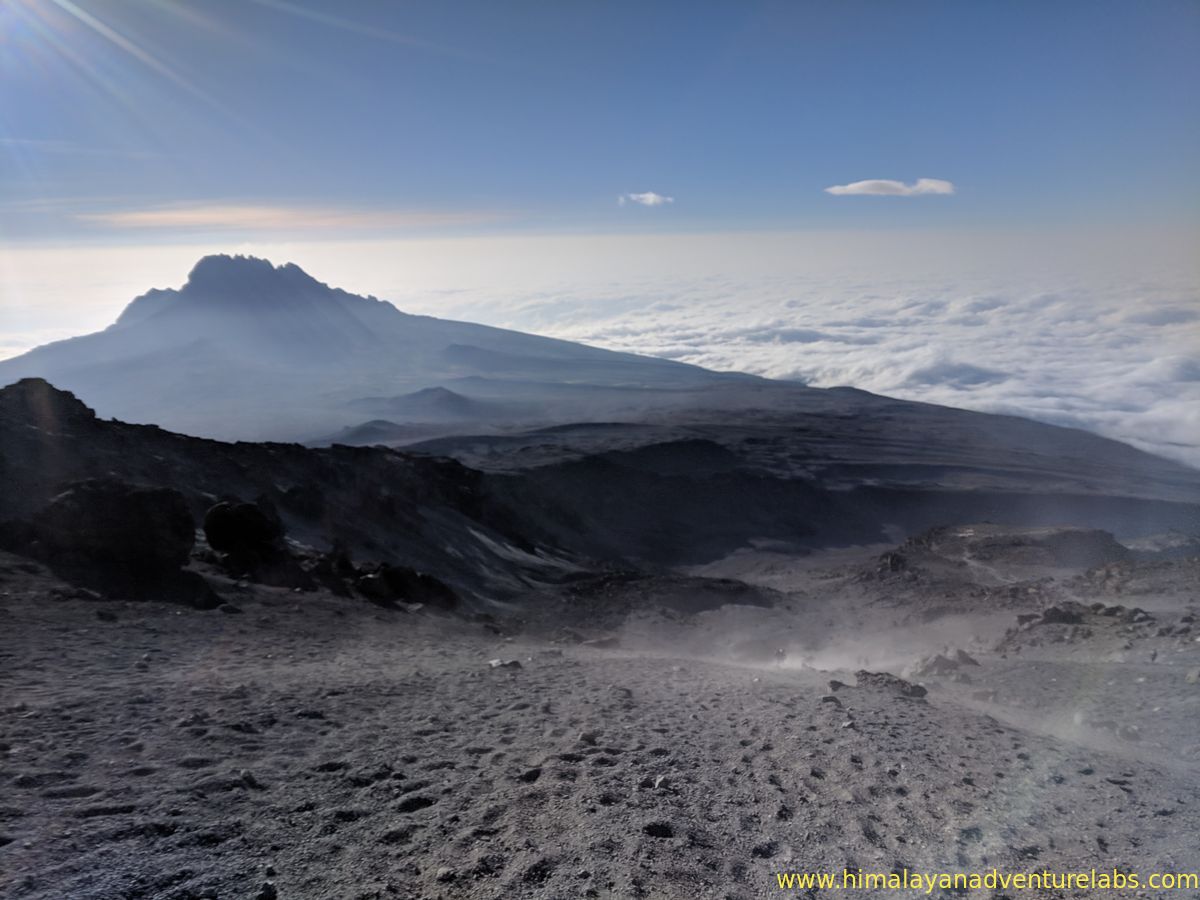 Kilimanjaro is heavily regulated by the park service. Certain routes are for going up, and certain ones are only for going down.  We chose the ‘Lemosho’ route which includes the longest and most gradual approach, starting from the west in jungle and climbing up to the Shira Plateau before wrapping around the south side of the mountain for a summit push from 4.650 meters at Barrafu Camp. 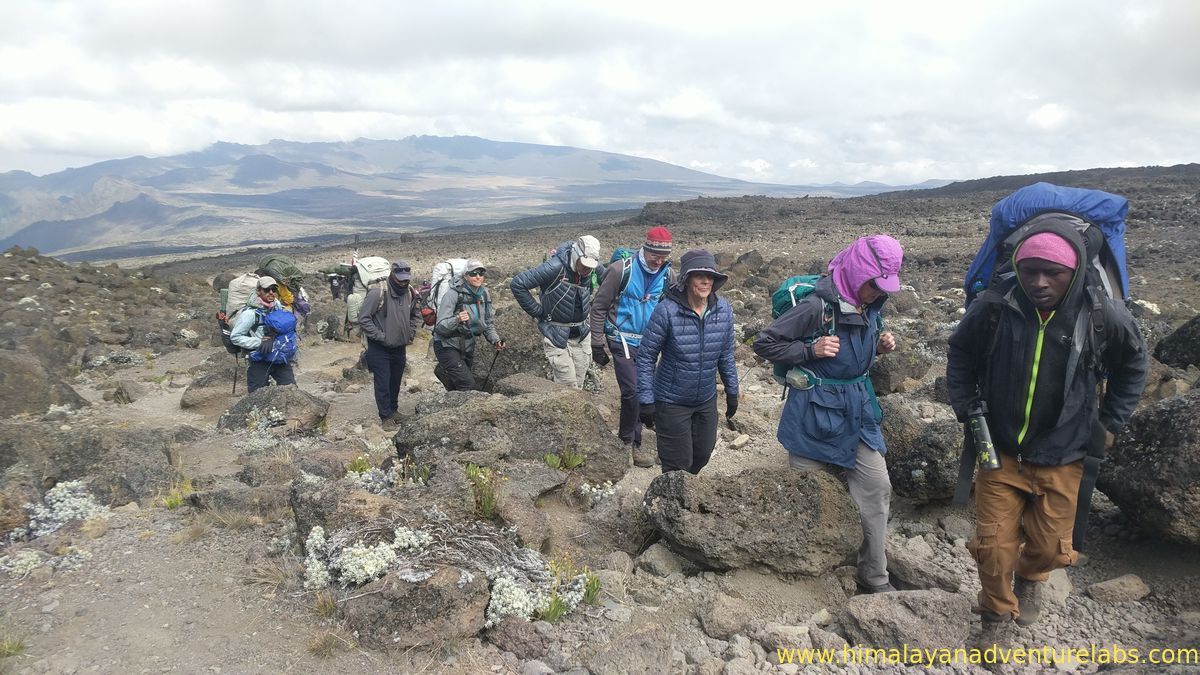 Overall our trip went well. Challenges included the altitude, dust, and close proximity to many other teams. Like popular high altitude trekking routes in Nepal – some team members struggled with GI and respiratory issues as well as symptoms that sometimes resembled early indications of altitude sickeness (which fortunately did not progress).  As with all of our trips – we contract with Dr. Pranav Koirala as our remote high altitude expedition doctor and also Michael Fagin as our weather forecaster.  Messaging back and forth via our satellite devices cleared all members for a summit attempt,  with the caveat that the top might have wind gusts of up to 47km per hour.

Barafu camp, a boulder strewn place on a ridge leading up to the crater rim stands at 4,650 meters.  It was more of a resting place for us than a true camp. We arrived mid-day from Karanga Camp at 3,950 meters and did our best to block out the sun and noise and get some sleep before our summit push. A slower team left at 11pm and a faster team at midnight with the goal to group-up just below the summit. With a little over 1200 meters to climb in the dark and the wind at high altitude, we expected , stretched across 5km of linear distance, we planned on 6 hours of climbing – hoping to catch the sunrise from the top.

Of course, things rarely go as planned in the dark at high altitude. One member experienced early signs of hypothermia which was solved with more layers and chemical hand warmers tucked in strategic spots. One of our local guides had stomach problems along with an old knee problem which caused him to separate from the group – after returning to Barafu camp he was wheeled down the mountain on a stretcher (and is now recovering well).

Extremely high winds, as forecast by Michael, and met us at ‘Stella Point’ at the crater rim as well as the morning dawn.  Two team members opted to head back down rather than risk more exposure and five tagged ‘Uhuru Point’ which is further along the crater rim. Frozen fingers, iced up cameras, and plummeting body temperatures ruled out the quintessential group photo. As the noted mountaineer Ed Viesturs says ‘Getting to the top is optional, but getting down is mandatory’ – and so down we all went and by 10am we were all back in Barafu camp with wind-burned smiles, and trying to organize gear for a long trudge down the mountain to Mweka camp, and thinking about hot showers and clean clothes the next day in town.

One thought on “Kilimanjaro Trip Report – 2019”

Whoasy.... an incredible adventure in an incredible place with incredible people really that sums it up.... be prepared for a trip of a life time... thank you from Colin and Sandy.... we will be back

I highly recommend doing this!! It's such an amazing experience and the people putting it on make it that much better! The loving culture, food and people make Nepal that much more beautiful! Sign up!! Just do it! You won't regret it!! Promise!

Our Langtang Fastback far exceeded my expectations. It was extremely challenging, beautiful and provided the experience to visit an area in Nepal that is working so hard to rebuild. Personally, I have to thank Seth for his willingness to help me reach my goal ... without him I most certainly would not have been able to. Both he and Sudeep are so knowledgeable and patient ... I never worried about my safety. Thank you for providing the adventure of a lifetime!!!

Seth and Sudeep are amazing leaders and friends. The trips are well organized and expectations set pretty accurately. Definitely the trips to take if you are looking for self supported, with beautiful trails off the beaten path, and want to push yourself. This was our second trip with HAL and we look forward to another!

If you really want to experience Nepal in its pristine setting while discovering what you’re truly capable of achieving, then you must consider HAL for your Nepalese adventure. Besides adventure, you will be rewarded with great camaraderie, a genuine Nepalese experience and the spectacular views that make this country majestic! A word of caution though: you will want to come back for their other trips.

I loved this. It was a big highlight of the summer. Would highly recommend next year's trip if you're looking for something beautiful, fun, challenging and unique.

The best trip for your money, hands down! This was a life dream trip of mine and this was exactly how I wanted to do it. Check it out if you've ever felt the pull to explore Nepal!

crazy shit. It's done. lifetime experience. it was a great time with great people! #AFP2016

Do it! You won't regret it for a moment. The trail, the people, the camaraderie are all 1st rate.

It's completely different from the Annapurna Circuit! I loved the remoteness of the route!...I felt like we definitely got to experience the back country of Nepal and the HAL summer house reinforces that experience....I absolutely love the format HAL uses for their trips! You guys have been able to blend making a guided trip truly feel like an adventure without it becoming a tour group.....My wife and I have now completed two trips (Annapurna Circuit and Langtang) with HAL and I truly think they have something special when it comes to guiding/leading trips. While you "think you signed up for a guided trip in Nepal," what you've really done is signed up to part of a team for the next 10-14 days. I wouldn't go to the Himalaya's with anyone else, nor do I want to!

Excellent logistics including being collected on arrival at the airport and dropped off at end of trip. Super fun team and diverse itinerary which included some trails that are not part of the official circuit. Great food, laughs and team dynamic. Challenging course meant greater level of satisfaction on completion of each stage. Highly recommend.

The Langtang Fast Pack was a fantastic trip on beautiful trails through Nepal's Langtang region. This was my second trip with Himalayan Adventure Labs and I could not recommend them more highly! I have a million beautiful memories and pictures from each trip, which has only increased my desire to return to Nepal in the future.